THE HISTORY OF JOSÉ MULDOON’S

Today Nogales, Sonora was the scene of a daring daylight bank robbery at the 1st nacional banco de Nogaales, located on Ave Miguel Angle de Quevado 112. According to witnesses, five men from the Muldoon Gang stormed the front doors of the bank and took bank president, Señor Salvador Rodriquez hostage. El Tigre, the bandíto in charge threw Rodriguez on the floor and to Salvador’s embarrassment, removed his clothes. El Tigre threatened to cut off Señor Rodriguez’ nose if he didn’t reveal the combination to the safe. Rodriguez persisted in telling El Tigre that he didn’t know and El Tigre ordered the safe blown up. Gatlin’ Gun Gomez attached some dynamite to the bottom of the safe with some Double Bubble he was chewing. That completed, he cut a lock of hair from Rodriguez and attached the end to the dynamite, he lit it and shortly the safe blew apart. The Banditos then emptied the contents of the safe and started for the door with Señor Rodriguez.

The local constabulary meanwhile had heard the blast from down the street at Rosa’s Cantina, where they were all drinking Jose” Wallbangers and playing Scorpion arm wrestling. Sheriff A. Caliente and his deputies rushed outside and mounted their fifteen burros, and galloped off towards the bank. Around the block Ojo Rojo was in the process of releasing tow female burros, very much in heat. The five deputies that were available after the release of the lady burros surrounded the bank and called in for the gang to surrender.

Macho Muldoon leaned out of the transom above the front door and proceeded to place 150 silver plated slugs into the five courageous but outgunned deputies.

Then the gang escaped to the south with their hostage Señor Rodriguez, naked and astride a captured burro. Sheriff Calienté and the remaining deputies were last seen headed North in pursuit of the two female burros.

Only one of the banditos was wounded during the robbery, one Scarface Saltillo, who was stabbed through the ear lobe with a large hat pin while being rushed by an angry young lady (Mme. Fifi Garcia) who was trying to deposit her illegal earnings in a numbered account.

Señor Rodriquez was supposedly released 30 kilometers from Nogales in Tequila Bends. As of yet he has not returned and is not available for comment.

The Mexican Federalés have been called in to search for Muldoon’s Gang and to assess the amount of money stolen from the bank. All that remains in the safe at this time is a piece of nose and Señor Rodriguezs’ clothes.

Open for Dine-In and Takeout 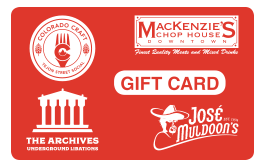